Not all towns in America are created equal. There are five cities in the U.S. that have become so weird throughout the time, you won’t believe they actually exist. These 5 quirky small towns in America may look just like any other place to live, but what actually happens there will surprise you.

If you’ve always wondered where all those circus folks live, here is your answer. Gibsonton has always been one of the freakiest towns in America. Located just 12 miles from Tampa, this little quirky town is home to about 10 000 residents, most of which are retired carnival workers, sideshow performers or traveling show folks.

Back in the days, here used to live the circus crew, including the Bearded Lady, Inferno the Fire Eater, with neighbors such as Lobster Boy and Percilla the Monkey Girl.  Residents were also allowed to keep elephants and circus trailers on their front lawns.

In Gibtown, as the locals like to call it, you can still find a lot of weird things like circus equipment in the backyards, carny rides or gorilla cages. Sounds like a fun place to visit if you’re not afraid of clowns!

This is the place where Hugh Hefner might want to go when he retires. Some people call it Disneyland, other think it’s more like a frat house, but actually it’s a retirement community where everyone is at the age of 65 and older.

The Villages is not like any other retirement home, because here the old people actually have the chance to feel young again and they are constantly partying. They have everything they need – from golf courses, clubs, swimming pools, restaurants and a hospital to a happy hour starting at 11 a.m., black market for Viagra, drunken public sex and naughty behavior.

Almost everyone drives a golf cart and every night there’s free music or dance event. Children under 19 are not allowed to live in The Villages, but they could visit for 30 days per year. Sounds like a good place to retire, right?

This might be one of America’s most unusual towns. Except for being the first all-organic city in The U.S., this place is built according to Maharishi Sthapatya Veda design. This ancient Sanskrit texts put an emphasis on health, happiness, and natural law.

Established in 2001, the city is entirely developed based on the knowledge derived from the ancient Vedic literature and is run by a city council consisting of five-people. 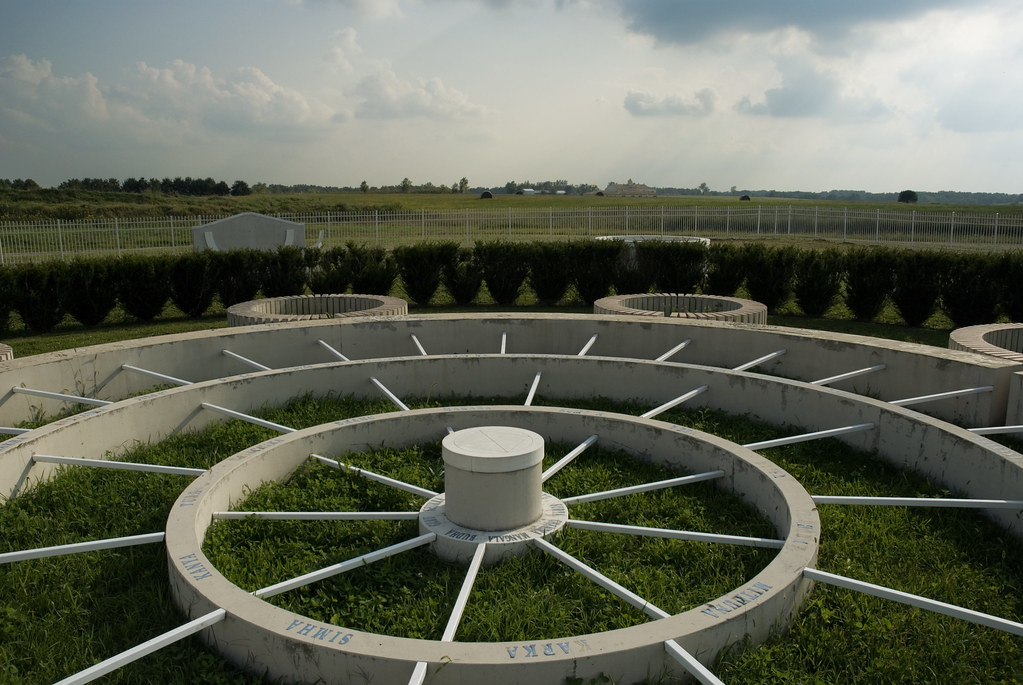 Each building is constructed according to Veda, so it faces east and has special silent space and golden ornaments.

We do not recommend you to visit this place, just keep it in mind if you’re passing near by. Miracle Village is not actually a village, neither miracles happen there. Tucked away in the sugar cane fields of Florida, it’s home to about 120 sex offenders. Yes, that is true. There is a special place in Florida where sex offenders live after they leave the prison. So don’t go there.

The Miracle village was founded in 2009 by pastor Dick Witherow, who wanted to create an isolated place where registered sex offenders are welcome and can live legally.

If you’re wondering, there is only one woman living in Miracle Village.

This small town in Nebraska has only 1 resident – the 84-years old Elsie Eiler.

Monowi is the only incorporated city in the U.S. with population of just one, but that doesn’t bother Elsie, who runs her own town, tavern and a library, named after her late husband, with an impressive collection of 5,000 books.

Elsie is also the mayor of Monowi, so she also deals with municipal stuff.

But don’t think she is lonely. The tavern has regular customers from the local farms, who love Elsie’s burger and fries.

The Top 15 Most Inked Cities In America

10 Weird And Wonderful Hotels To Stay At

Top 10 Glamping Sites In The US